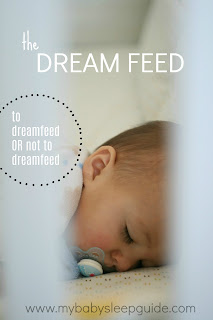 I've talked a lot about the dreamfeed over the years. It's a hot topic-- because who doesn't want to get an extra couple hours of sleep with a new baby early on? That's at the top of many people's to-do list with a newborn. It's certainly at the top of my list!

With all this chit chat about the dreamfeed, many people are surprised to find out that I didn't dreamfeed all my children. Honestly, I was surprised to find myself not dream feeding all my children. I sat around talking about how amazing it was all the time and then I decided I was going to ditch it with my second child. And my third and my fourth.


It's not that the dreamfeed is a bad thing. I still think it is pretty awesome as far as sleep-advice-every-new-parent-should-hear-about goes (as well as costco baby wipes, because those are just the best). But I realized that it just wasn't for me.

With my first baby, Joshua, I dreamfed him but had to pump because he was so stinking sleepy to nurse. I tried everything but nothing worked but a bottle between his lips. This ended up working out ok because I was working part time (mostly night shifts) and a bottle every night kept up his bottle practice for when I was working or away doing something else. It also gave me a break in the evening while my husband spent some one on one time with the baby feeding and cuddling him. And of course it gave me a good stretch of sleep after the dreamfeed. Sometimes I would pump earlier on in the evening and then go to bed before the dreamfeed and I'd fit some pretty amazing sleep in there.

With my next child, Jacob, I planned on doing the dreamfeed. I started off cluster feeding and then giving the dreamfeed a few hours after the end of the cluster feed. But he was pretty much waking up on his own then or about to wake up since he was a newborn so it wasn't quite a dreamfeed. By the time he was at an age that the dreamfeed is really a dreamfeed (baby is sleeping longer stretches at night and has his nights and days figured out), I decided to not do the dreamfeed. It was kind of a sudden decision but it ended up working out well for me. Here's why:


So that is some list!  I ended up being happy with my decision to not df and I didn't give the df with my next two children either. Well, not really. I did some cluster feeding with my newborns the first month or two. This allowed me to get some extra food in baby before bed and also have baby go to bed a little later at night, after which I'd shortly go to bed. By the time my kids were a couple months old, I was just feeding one time at night and they were going to bed early and I was going to bed at a normal adult time.

For most people the dreamfeed works out amazingly. Baby does well with it, parents get extra sleep  and everyone is happier. But if you either choose not to do it or it just isn't working out for baby to do it (causes sleep issues, etc), then no worries. Good sleep for the both of you is very possible either way.


Want to learn more about the dreamfeed? Check out these posts:
What Is A Dreamfeed And How Do I Give It
Troubleshooting the Dreamfeed
Dropping The Dreamfeed