Daylight Savings - Time to Jump Ahead! 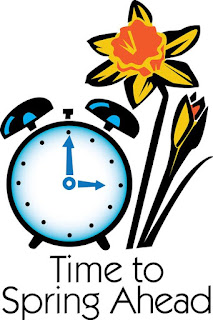 I really, really don't like daylight savings. I think it is silly that we still have it, and I've seriously considered moving someone else, like Arizona, where they don't have this darn skipping back and forth each year. It was a little annoying when I was younger, but now that I've got kids, it's SUPER pesky!

Anyway, I haven't picked up and moved to Arizona yet, so I've got to deal with the "spring forward" (and, gulp, the "fall back" in 8ish months!) and most likely, you have to deal with it too so let's go ahead and have a chat about it. Maybe we'll both dislike it less afterwards :)


When is Day Light Savings?
This year, 2019, if you're in Canada or the US, you'll have to move your clock forward 1 hour on March 8. For my friends in Europe, you get to make the switch on March 29.

What are some time changing options?
There are a few different things you can do with daylight savings  depending on your child's current sleep schedule, your family's schedule etc.


How do I Spring Forward for Daylight Savings?
Lucky for you, this time of year is the easy one to work with. For most kids, it's really easy to move their whole schedule an hour later compared to moving it an hour earlier (early morning wake up, anyone?)

With either the full or partial spring forward, you can take it slowly or quickly.

With the quick change, you'll change all the clocks in your house the night before and get your child up at their regular time by the clock (so if they used to get up at 7 am, you get them up at 7 am, even though this is actually what used to be 6 am). Don't forget to turn your alarm clock on so you don't all sleep in! Most kids will adjust in 2-7 days and start to wake at the earlier time by themselves and be ready for bed at the new time. Some kids, and you'll figure this out as the years go by, will do better with slow change.

For those children who are really sensitive or have a hard time with any kind of routine change, you may want to take things more slowly. Wake your child up 5-15 minutes earlier every 1-3 days (you're probably ok making it earlier each day, but there are some really sensitive kids out there!). With most kids, you'll have great success adjusting their entire routine (meals and sleep) to the new morning wakeup time of the day. So if you move from 7:30 to 7:15, you'll do every activity of the day 15 minutes earlier, including bedtime. There are a few kids out there who have very strong internal clocks and get really stuck on their bedtime hour and have a hard time falling asleep if it is moved earlier. For these kids a few days usually makes all the difference.

I personally prefer making the change quickly. Not only do my kids do fine with a quick change, but if I can do things quicker and smoothly, I'll likely do that. Who wants to adjust things for a week(I've even heard of some people adjusting things over a whole month!) if you can do it successfully in 1 day. I definitely don't!

Remember, our children have strong internal clocks and much of this is controlled by their daily routine and by sunlight. So it's especially important during this transition that you keep to a normal daily routine (routine feeding and sleep times, in the least) and that you keep sleep times dark and have plenty of light and sun during waketimes, especially first thing in the morning.
Rachel Rowell
Share